Some career paths seem totally random while others are meticulously planned.  My own implausible life course was set on its’ trajectory by a combination of unlikely influences…. from the far east of Japan to the east coast of America.

As the smallest kid on the block, in school, well just about everywhere, it was especially challenging to fit in.  I was that kid who was never allowed to drive the bumper cars down at the NJ shore “To ride this ride you must be taller than this line”.   SciFi and Fantasy Books and TV seemed the only available escape for this awkward kid with no inclination towards sports (what everyone else seemed to exhaustively obsess on nearly all the time).

I grew up in what was then called by many- “the country”.  With no stores or theaters or anything within walking range for stimulation, we entertained ourselves with enriching activities like climbing trees and swinging on roped tires over the nearby eel-filled creek [yuck].  This life gets old fast if you are a very restless and bored-out-of-his-mind kid, and I was certainly one.

Excitement and adventure wasn’t headed in my direction anytime soon so I learned to make my own. It started with build-your-own-electronics kits, then onto making forts and tree-houses, and somewhere along the line for Halloween this rather elaborate lizard man outfit.  I had found what likely was an old red Phillies batting helmet, painted it Eagles green and cut up a green raft for face, body, arms and legs all held together by electrical tape.  Although very crude, wearing it gave me a curious anonymity and extra positive attention which I had not experienced prior.  A new feeling- a kind of electricity flowed through me for the first time.  It was an incredible feeling- a high I’d seek out again and again.

“Star Trek” and films like the George Pal directed original “Time Machine” were my favorite escapes in the early 70’s.  Monster movies didn’t impress me much at the time- the Godzilla films seemed to be fake and perhaps I dismissed them as just “cartoons for little kids”. Well, I was a pre-teen and we weren’t as wise as the kids are today… and I had yet to form an appreciation of animation.

It was sometime around 1977 I believe- watching a daytime replay of one of those ‘adult comedy shows’ which ran late at night.  Gilda Radner from Saturday Night Live had this ongoing bit where she imitated the famous news personality Barbara Walters.  The premise might seem  completely ridiculous these days, but back then we nearly peed our pants when Gilda worked her comedy magic on the show.

It was the middle of a Sunday afternoon watching an SNL rerun when John Belushi stomped across the screen in a monster suit for “Baba Wawa Interviews Godzilla”.  I think I must have fallen into a trance- this big monster was actually a costume with a comedian inside.  He was the focus of attention.  He was big and powerful.  All the things I never had & craved.  I knew then and there I wanted to be Godzilla, King of the Monsters (or at least one of his mates).

Life in the Information Stone Age

At the beginning of the 80’s, there was nothing around like an internet.  In rural Pennsylvania there certainly were no places one could go to learn about non-farming, non-sports things such as making monsters, fabricating costumes, etc. Certainly there was nowhere to buy raw materials to make anything so unusual as a foam-rubber monster suit.  This wasn’t Hollywood, not even remotely.  It was practically next door to Amish Country where one could find plans to build an amazing horse buggy, but that wasn’t what ‘buzzed my motor’.  Besides, I was neck deep at this time in the magical fun world of parochial High School.  That real monster consumed 4 years of my life like a soul-devouring machine leaving zero energy left for the pursuit of happiness.  Fortunately for me, community college was just around the corner and with it my first taste of FREEDOM!!

Recipe for a Godzilla Suit

POOF! You have a Godzilla suit and place “Best in Class” at the 41st World Science Fiction Convention.

Here I must digress but just for a moment.  In the years leading up to 1983 I had written Toho Studios in Japan many times asking how someone might apply a Godzilla actor.  Perhaps had I written in Japanese there might have been a response- I was clearly reaching for the stars.

In the 80’s, Philadelphia still made a few of its’ own TV shows.  My Godzilla (“cosplay” as it is called today) appeared on 2 of them: “Saturday Night Dead” and “Evening Magazine”.  They were volunteer gigs of course but I was paid handsomely in awesome attention.  Perhaps a year later, when I received a “cease and desist” letter from Toho Studios to “make no more Godzilla suits” I was stoked!  THEY RESPONDED TO ME- TOHO KNOWS I EXIST!!   “Surely it wont be long now, I’m on my way to landing a job as a movie monster actor!”

As they say, life gets in the way.  Sh*t Happens!  Some good, some bad, some just irritatingly stupid.  Dreams and expectations are down adjusted because you aren’t in the right place at the right time with the right skills or the right connections.

Even when you’ve managed to track down the office secretary phone number for the Roland Emmerich / Dean Devlin Godzilla film unit you are stonewalled.  She tells you they don’t need a mascot for the movie.  You explain you are a suit actor and she tells you there are no suits in the movie, that the monster is CG.  A year later when you read of the Pittsburgh auditions for a dozen “Baby Godzilla” actors in the Madison Square Garden scene you want to scream.  A Godzilla film was shot practically in your backyard and a dozen people with no prior creature suit experience were hired to perform in baby Godzilla suits in a Godzilla movie.  IN YOUR BACKYARD!!!  It was like being that short kid who was denied driving the bumper cars all over again.  That was it- time to throw in the towel.  I wasn’t going to achieve my dream, my calling.

Becoming a Guild Member and other chance encounters

In 2003, an associate and I merged our business interests at the time and formed a mascot talent agency (mascot.org).  Our mascot talent agency brought us some incredible experiences including working alongside some of the Henson Family and also to more than a dozen White House Easter Egg Rolls.  In 2010 I found myself in a ‘must join’ situation with the Screen Actors Guild union in order to work in a MLB TV commercial.  So I joined.  This move, expensive for me at the time, I should have made earlier.  But as the saying goes: better late than never.

Years would pass…  nearly 20 of them.  Then out of the blue came an opportunity to actually play Godzilla at the Las Vegas Licensing Show via that mascot agency I co-founded 16 years earlier.  By some alignment of the planets my height was -just- enough to properly fit and operate an actual Toho Studios Godzilla suit at that trade show.  It didn’t have the fancy tech of the actual film suits but since I wouldn’t be called on to breathe fire onto trade-show booths, it was totally OK with me.  The suit was real- pulled from the studios own massive plaster molds.

This monster of a dream took 40 years to achieve – I never actually made it into a feature film, but I believe my passion shined through at that trade show because the following year several more opportunities called- including New York television work on the Late Show with Stephen Colbert, a fun SyFy channel bumper and several high level events in the City of Angels.

It was a divine experience with my old friend.  Hopefully not the last!!

Keep an eye out for more articles related to Godzilla, coming soon. 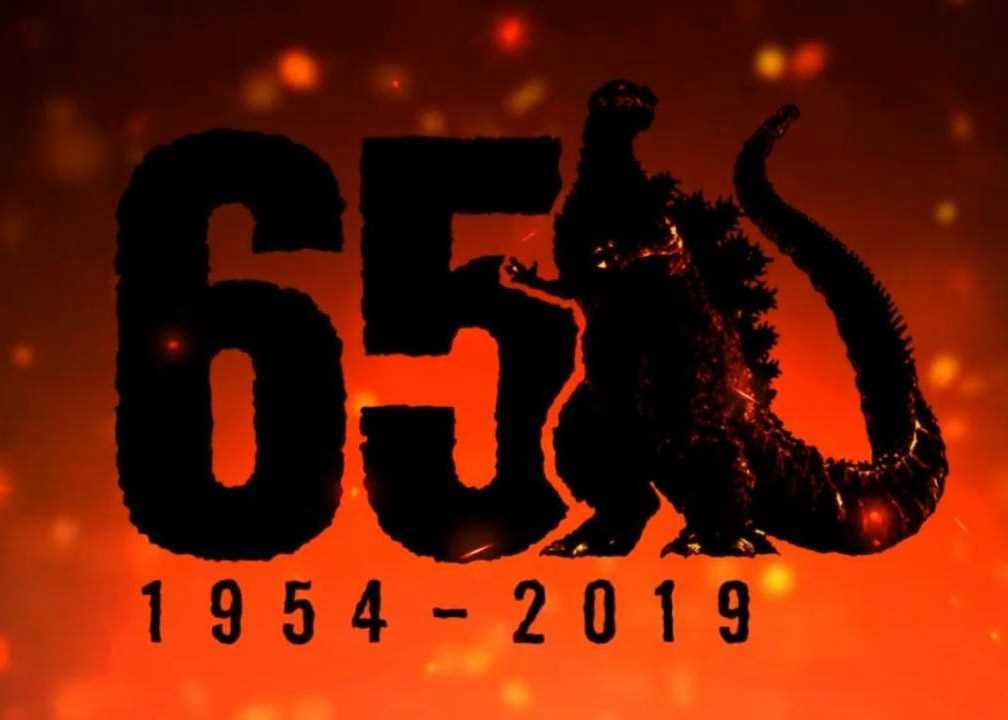 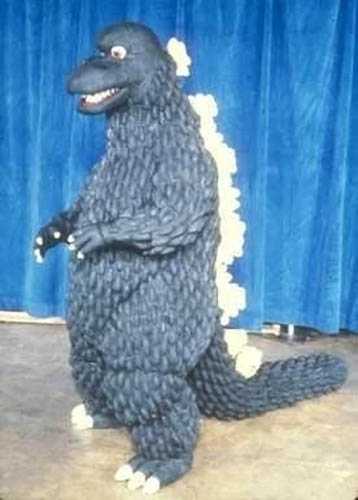 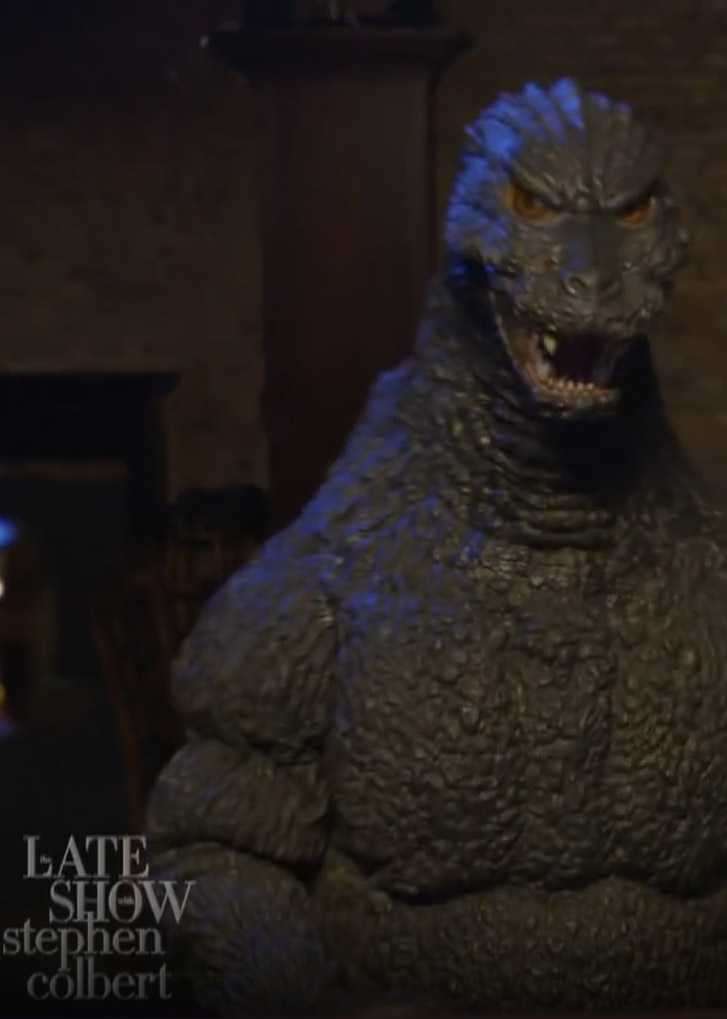 Filming at The Late Show with  Stephen Colbert October 2019 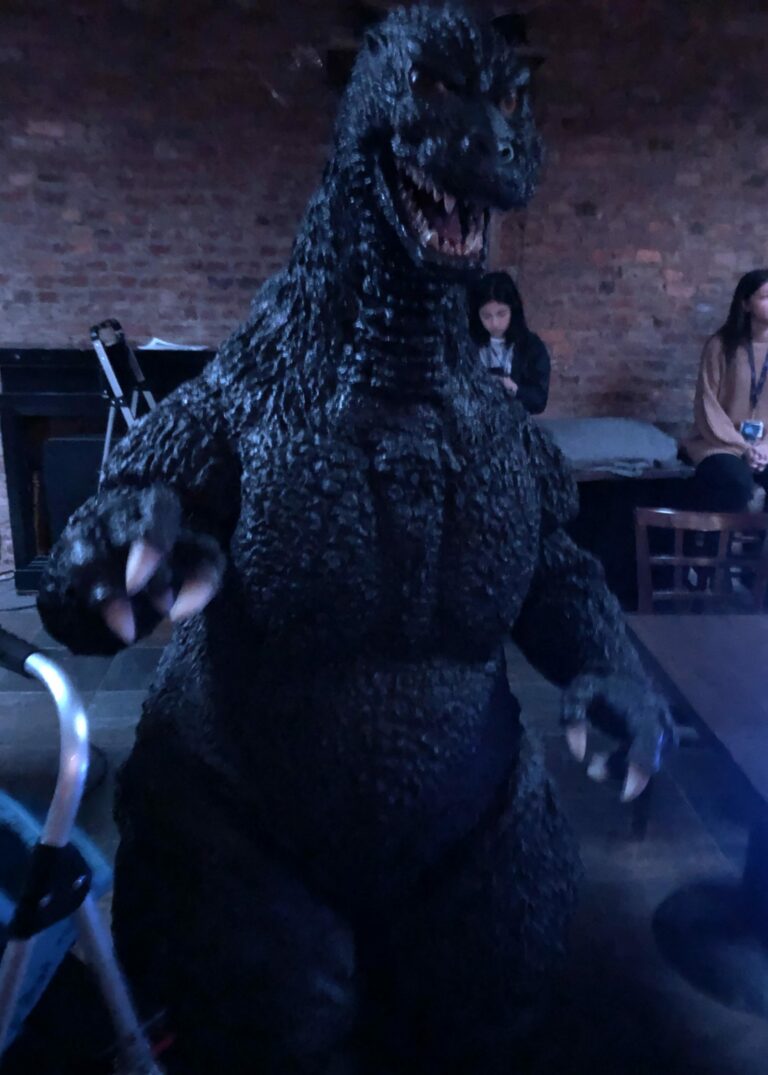 Bar scene during filming at The Late Show 2019 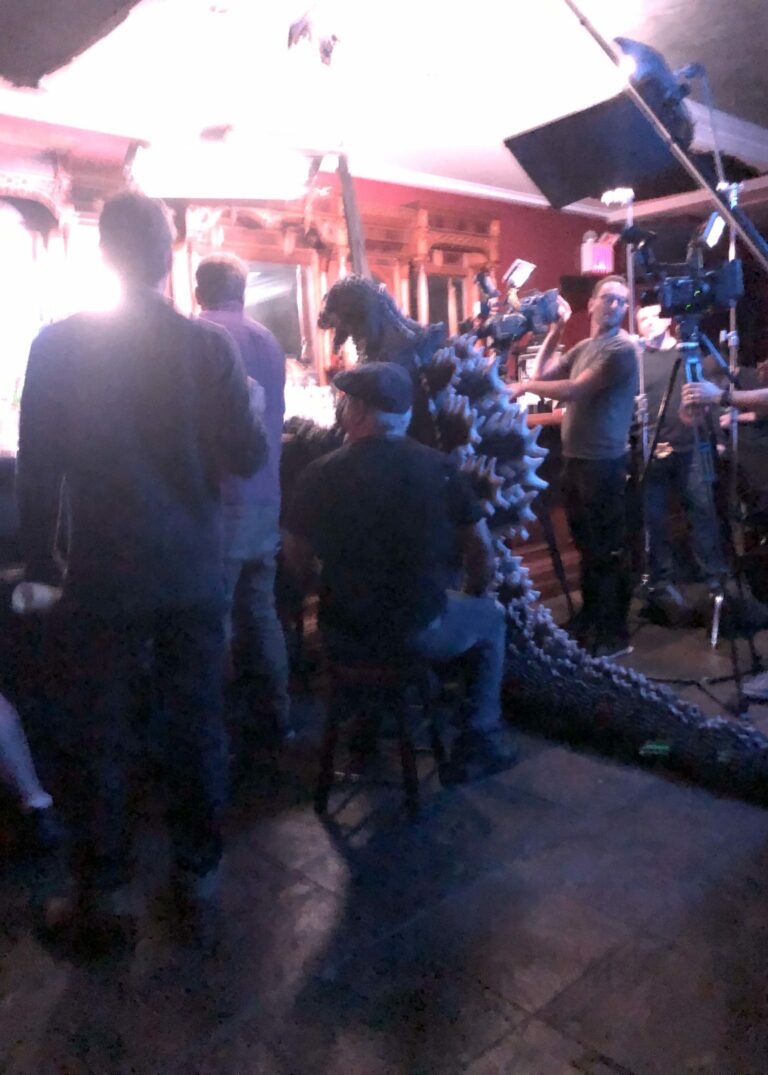 During filming at The Late Show for the cold open 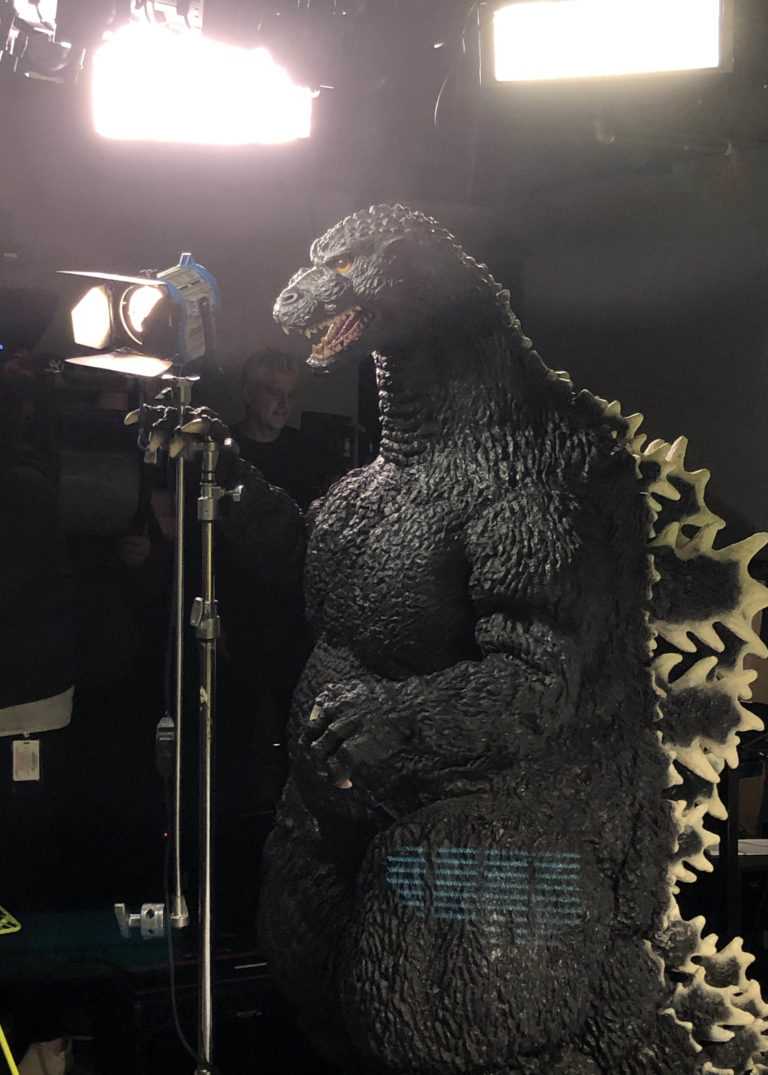 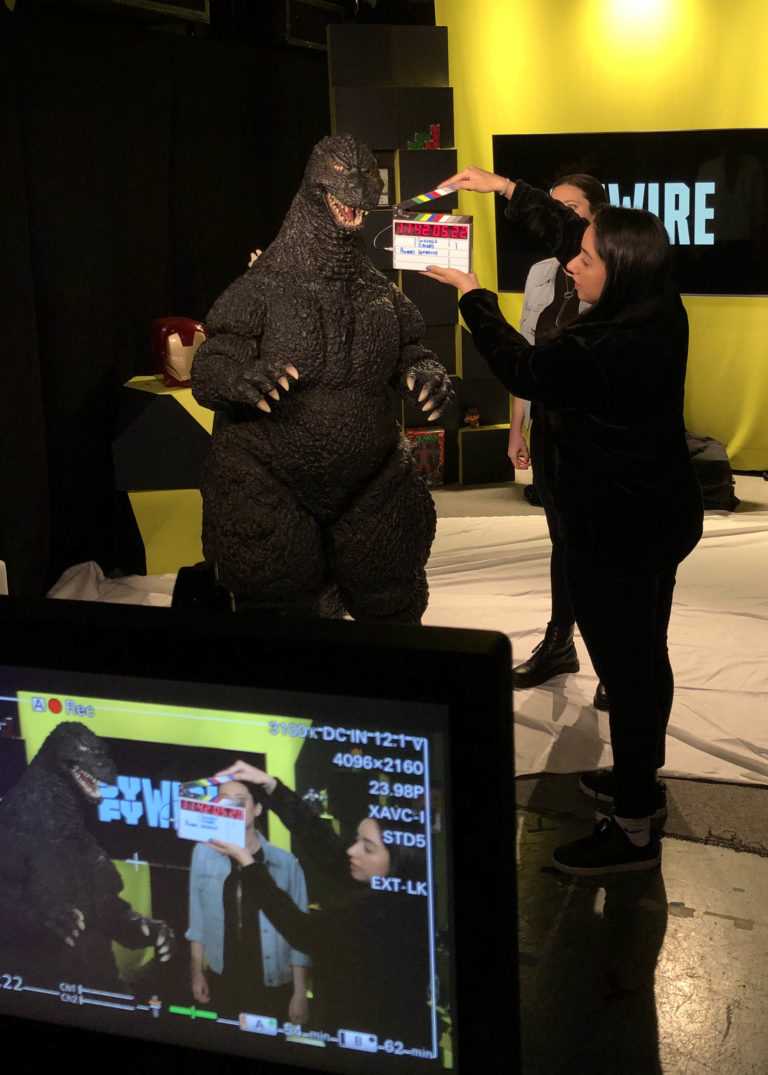 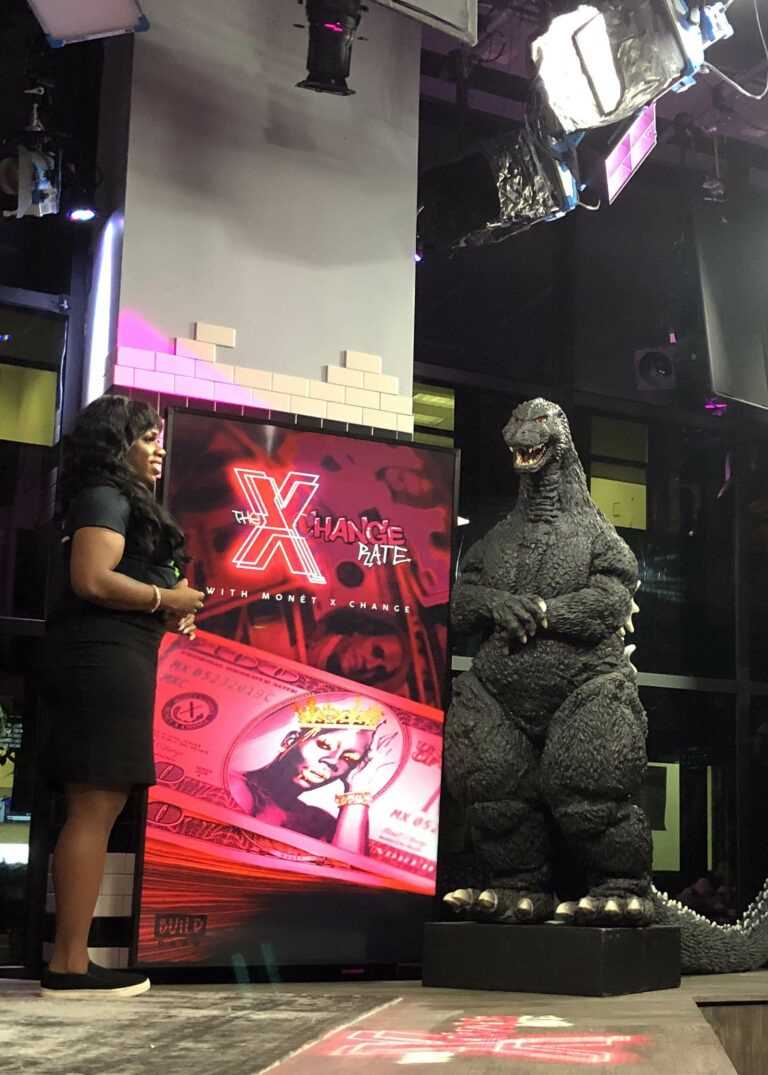 Godzilla with Monét Xchange in NY 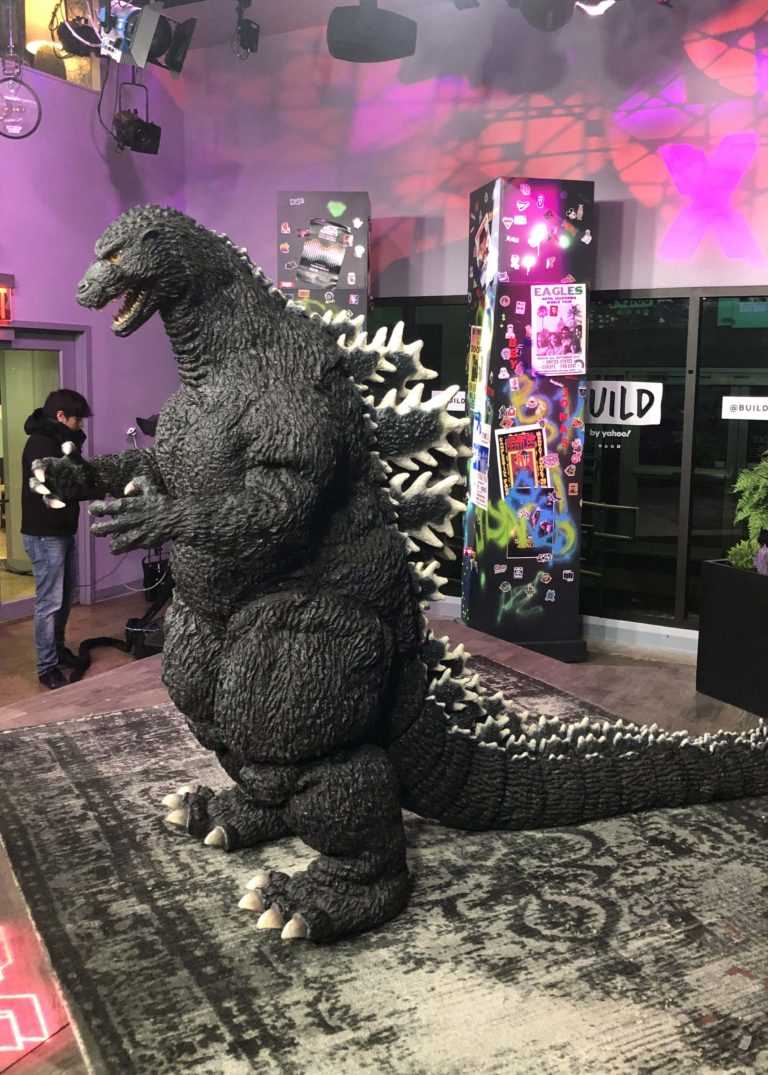 Filming at The Build Studio NY 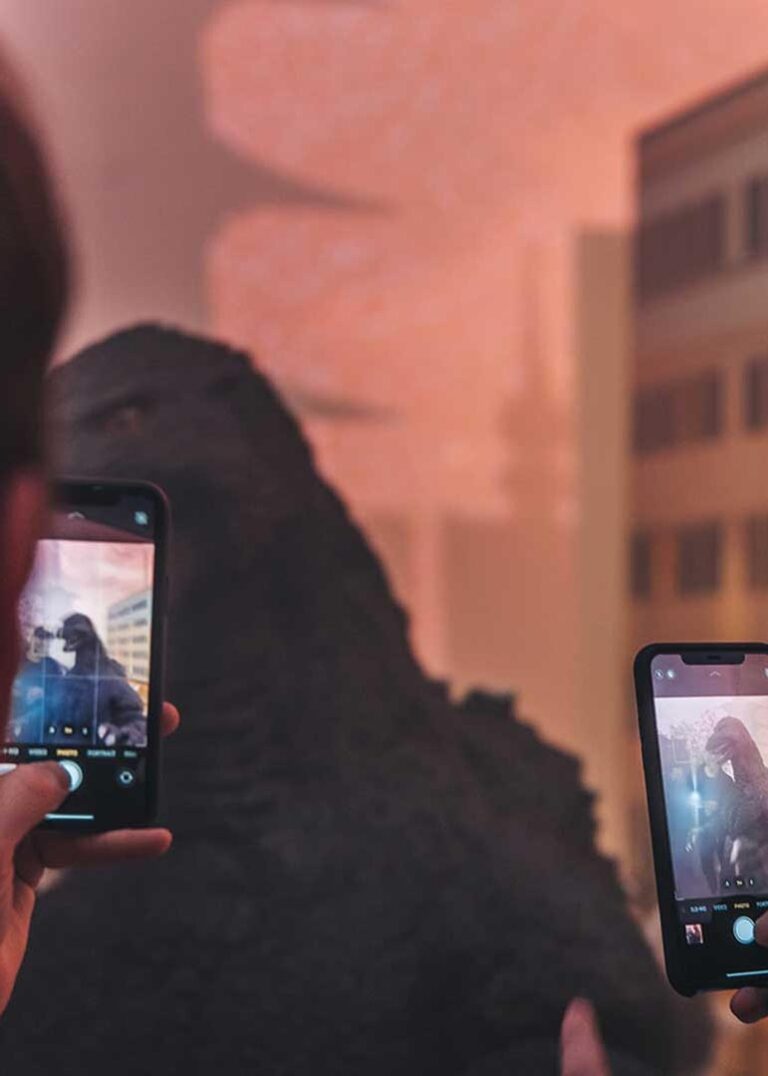 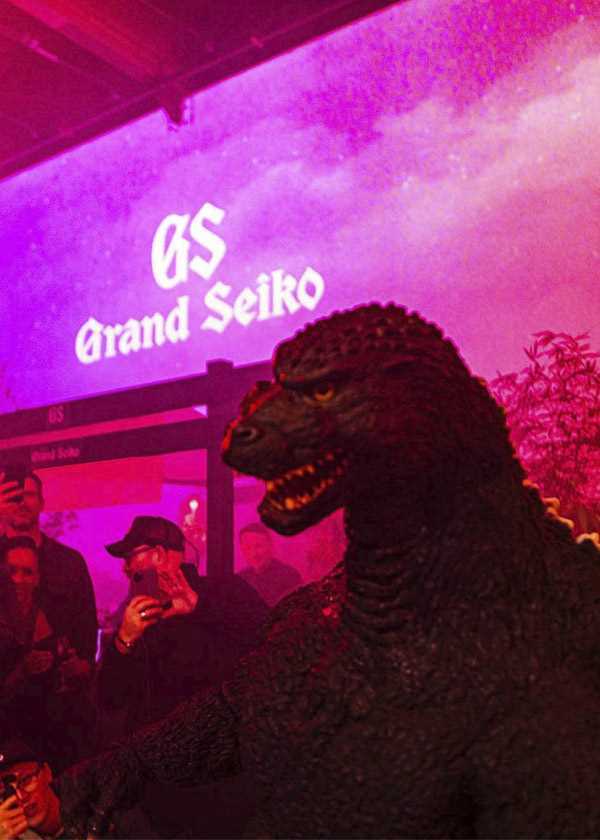